THE HISTORY OF LATIN AMERICAN in the last half century is a “drama in three acts”. Act one: Dictatorships overthrow the armed left in the milititary field. Act two: Democracy is back and the end of the soviet communism coincides with a decade of “free market economies” (the ’90). Act three: Former guerrilla take power in almost all the countries. 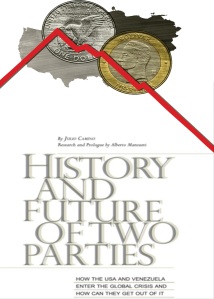 In the First World it was not that different: The Cold War ends with Margaret Thatcher and Ronald Reagan cleaning up the Anglo-Saxon economies; the Berlin Wall fall taking “The Empire of Evil”. But when Neo-Liberals go out of the scene, a horrible Empire of Evil (part II) suddenly appears and before it, a global economic crisis that has not ended yet, which, as in the pass, has taken the left to the power.

This book gathers some pieces of the puzzle regarding two of the many conductor wires to uncover the plot. We are talking about the parallel histories of the Republican Party of the United States and Democratic Action (Acción Democrática) in Venezuela. Political Parties? Aren’t the political parties among the worst villains of the movie? YES! This is what we daily see with a script written by the promoters of that “Dictatorship of Relativism”, whose stronger and bravest complain was made by the Pope Benedict XVI, who is already retired.

The author invites you to watch this “movie” to understand what is happening.

HISTORY AND FUTURE OF TWO PARTIES

Or download it from the most important retailers on the net.